Weissenburg Bad | Lenk-Simmental
The hiking trail section Iffigenalp - Blattihütte on the Rawilpassweg is closed from Monday to Friday. Further info

Where Europe's nobility once came to take a cure 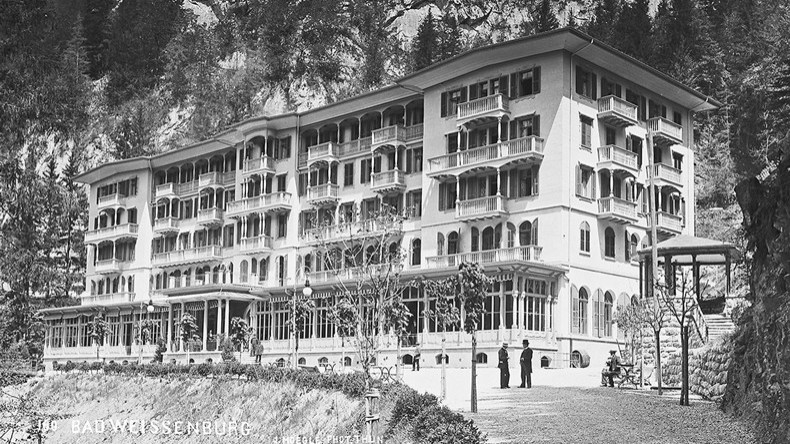 The source of a hot spring bubbles above Weissenburg in Simmental. For the last 350 years, this Weissenburg mineral spring water has been used for bathing and medicinal purposes. In 1936, the Dutch Queen Wilhelmina came to the spa with her daughter for a leisurely spell. During their time here, Princess Juliana became engaged to Prince Bernhard, thus attracting guests from all over the world.

In 1602 the council of Bern decreed the water source a thermal spring and let the rear Weissenburg Bad with bathhouse be built. Due to the boom of people seeking the bath's healing powers, the front bathhouse and spa, the Grand Hotel Weissenburg Bad, was opened in 1849. The Weissenburg Bad became the meeting place for high nobility and was well-known all across Europe. The flourishing spa came to a temporary halt with the onset of World War I. After the war ended, the number of guests visiting the baths sank and in 1925, the rear bathhouse was closed. After World War II, even the Grand Hotel Weissenburg Bad lost its importance and in the 1960s, it was finally closed for good.

Restoration of the ruined rear bath and chapel in 2014 & 2015
Over nearly the past 100 years, growing vegetation and vandalism has sharply increased; thus leading to the almost complete destruction of the buildings. It was, however, restored under the direction of the Bath and Thermal Spring Weissenburg Association, a restructuring plan, and the scientific management of the Bern Canton Archaeological Services. After the restoration was completed, one could once again clearly see the defined outline of the building ground plans. The preserved historical views and images come together to convey the impression that the bathhouse and hotel buildings are from the late 19th century and early 20th century.

A visit to the Weissenburg Bad is a worthwhile experience for all history, tourism history, architecture and archaeology enthusiasts.

Weissenburg Mineral Water
Around 1930, the young engineer Hans Widmer had the idea to use the thermal spring water to fill up bottles for consumption. In 1935, he founded the Weissenburg-Mineralthermen AG (thermal Spa) and opened up a production facility in the cellar of the spa house with a few employees and simple equipment. It was difficult at the beginning, and not only because of the competition. First of all, mineral water with lemon and orange flavours had already been successful brought to market in Switzerland. The most effective advertising the water received was when the Dutch Queen started having Weissenburg mineral water delivered to her because her doctor had recommended it as a cure.

In1985 the Weissenburg-Mineralthermen AG (thermal Spa) and the Brauerei Feldschlösschen (brewery) merged. Many different factors led to the closing of the company, such as the need for large investments to sustain the quality of the mineral water.

You can, however, still drink Weissenburg Spring Water today. At the Weissenburg train station stop, you can drink the the healing Weissenburg water from the Brünneli (fountain). So fill up your bottles and enjoy the healing powers of this water.

Excursions
The Bath and Thermal Spring Weissenburg association organizes tours on every Thursday, from 3 June to 14 October 2021 (3,5 hours).
Other times and dates on request.

Price: Donation to the association

Arrival
From the Weissenburg Train Station on foot, it is about 45 minutes away. The well-maintained paths and a little effort make it easily reachable.

Reading this research before your visit will deepen your understanding of the Weissenburg Bad. Order with the association or with the Lenk-Simmental Tourism.

Bath and Thermal Spring Weissenburg Association
This association wants to preserve the Spa’s history. This is why the association is glad to welcome new members who are interested in working to preserve this special place and participate in its future.